Flying With A Legend: The Life Of Howard Hughes

There's no pilot quite like Howard Hughes. One of the richest men in the world at the time, the multi-hyphenated tycoon had his hand in a variety of industries such as film, aviation, and even business and finance. An enigma of a man, Howard Hughes suffered from a variety of personal problems that included Obsessive-Compulsive disorder, commonly known as OCD. This, paired with his legendary career as a pilot and aviator, makes Howard Hughes one of the most studied figures in history.

Hughes was known for his versatility not only as a businessman but as an individual altogether. From film and television to philanthropy and aviation to engineer, Howard Hughes left his mark within a wide range of different industries. With such an impressive and versatile life, it shouldn't come as a surprise that the life of Howard Hughes has piqued the interest of many. Here is everything you need to know about the great Howard Hughes. 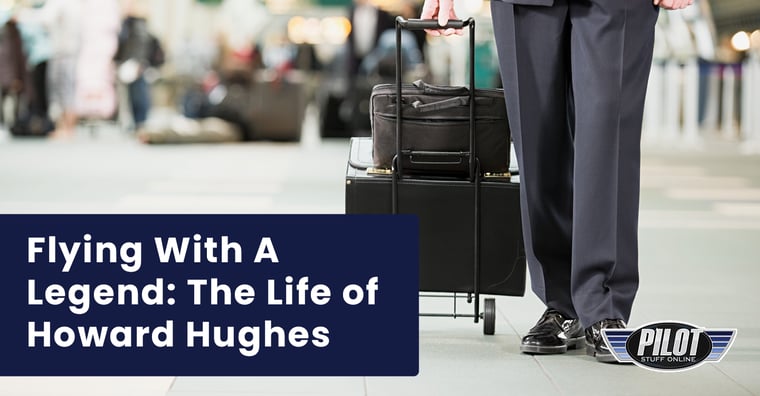 Born on December 24, 1905, Howard Hughes was born in Humble, Texas. Hughes found a passion within both aviation and filmmaking at a very young age. He took this passion to the California Institute of Technology Rice University. Hughes would later go on to drop out of school shortly after his father passed away in 1924. Directly after dropping out, Hughes married his first wife, Ella Botts Rice, in 1925. After tying the knot, Hughes and Rice moved to Los Angeles, where Hughes hoped to break into the film world.

After his first short film, Swell Hogan, Hughes went on to gain immense control within RKO companies. This included RKO Pictures, RKO Studios, RKO Theatres, and even the RKO Radio Network. With this power and RKO companies, Hughes quickly rose within the world of film, going on to produce a massive haul of 26 films that included classics such as Scarface, The Outlaw, His Kind of Woman, and Sky Devils.

Howard Hughes wasn't just known for his film career. He was also regarded as one of the most daring and successful aviators within the world of aviation. Hughes' courage was well-regarded due to the fact that he almost lost his life in four separate plane crashes. These crashes did not scare Hughes away from flying again as he went on to manufacture and fly the Hughes H-1 Racer. With the Hughes H-1 Racer, Hughes went on to set the landplane airspeed record on September 13, 1935, at 352 mph.

On July 14, 1938, Hughes went further on with his aviation career by flying around the world in just three days, 19 hours, and 17 minutes. Hughes began and ended this trek in New York City and flew through a variety of popular areas such as Paris, France, Moscow, and even Fairbanks. It was around this time that Hughes was dating the infamous actress and model Katherine Hepburn. Hughes went on to be awarded the infamous Collier Trophy for his flight around the world in 1938.

Tips For Gaining Your Pilot's License

It started the same way for every prospective pilot or aviator. Playing on the playground or in the...
Read More

The Memoir Of A Legend: Fate Is The Hunter

Every pilot has a story that's worth being told. Whether it be a commercial airline pilot taking...
Read More

A Timeline Of The History Of Flight

For as long as anyone can remember, flight has been the leading form of transportation. It's hard...
Read More