The Memoir Of A Legend: Fate Is The Hunter

Born on October 13, 1910, Ernest K. Gann was an American jack of all trades. From aviator to author and sailor to conservationist, Gann made the best of his entire life of eighty-one years without wasting a single second of it. As Gann's life and many careers progressed, he took time out of his immensely busy schedule to write and publish a variety of books that depict his life experiences. One of these pieces of literature happens to be a memoir titled "Fate Is The Hunter." Regarded as one of the most influential books on aviation ever written, "Fate Is The Hunter" is an incredibly detailed and intimate depiction of Gann's career as an aviator. As one of their newly offered products, Pilot Stuff prides itself on selling "Fate Is The Hunter" in order to teach about the impressive and elaborate career of Ernest K. Gann. 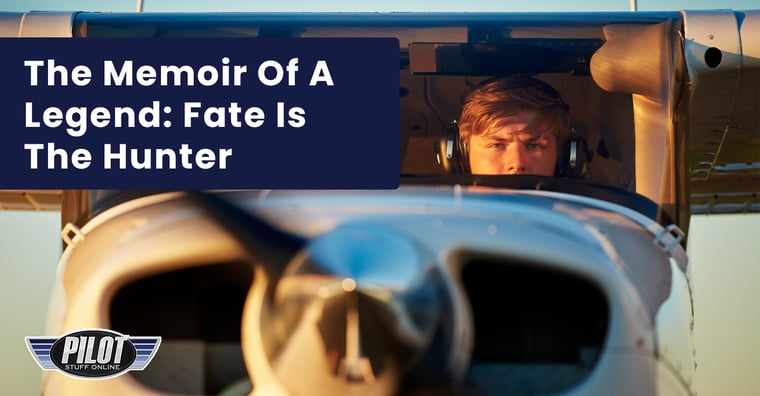 What Is Fate Is The Hunter?

Written near the end of 1961, "Fate Is The Hunter" is the great Ernest K. Gann's personal memoir. It depicts his career in aviation from the 1930s all the way up until the 1950s. Within this memoir, Gann began his career at American Airlines in both Douglas DC-2's and DC-3's. Here, Gann was able to witness the birth and infancy of civilian air transport before finally moving onto wartime flying in C-54's, C-87's, and even Lockheed Lodestars.

"Fate Is The Hunter" was met with immense critical and widespread acclaim. Just recently, in 2019, David Mamet, playwright of classics such as Glengarry Glen Ross and Wag The Dog, considered "Fate Is The Hunter" to be the best book on aviation ever.

The Life Of Ernest K. Gann

As we've said above, the life of Ernest K. Gann was an incredibly interesting and compelling one. One that spread over countless careers and even more myriad accomplishments. From his career up in the air within aviation to the intricate details of the written word, Ernest K. Gann lived a life of many mysteries and many accomplishments. Though most of the twenty-one novels that he wrote were entirely devoted to the world of aviation, Gann did dabble within the work of pure fiction that spotlighted his career as a fisherman. His two most notable works that dealt with the sea and fishing were "Twilight For The Gods" and "Fiddler's Green," both of which were met with immense praise and acclaim. A true all-American, Ernest K. Gann will always be remembered for his versatility and tremendous bravery.

A Timeline Of The History Of Flight

For as long as anyone can remember, flight has been the leading form of transportation. It's hard...
Read More

Best Travel Tips To Live By

Traveling is a confounding dichotomy to say the least. We all dream of traveling to the most exotic...
Read More

Pilot Stuff has added a new product to its already impressive inventory. The Stratus 3 Kit is an...
Read More